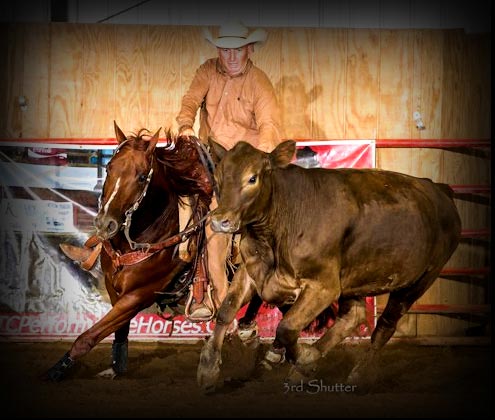 You have already been introduced to Woody Taylor, as the winner of the Reserve High Point Open honors. He also competed in the Three Year Old Challenge during the World Show on One Time Bugsy, owned by Jennifer Frame. When Woody was at Todd Crawford’s place in Oklahoma last fall, he rode a number of 2 year old prospects. He knew that Jennifer was looking for a young horse to start and he suggested One Time Bugsy. Bugsy had pretty good breeding (One Time Pepto, and a High Brow Cat mamma). Woody describes him as balanced with a nice way of going. He thought Bugsy would rein or even cut, but it has turned out that he can do both pretty well. He is well on his way to being a Working Cow Horse.

Jennifer has shown horses for quite a while – she claims Chicago, when you ask where she’s from, but is really an “army brat” so has lived in a number of places. While in the Chicago area Jen rode hunter and jumpers, worked for a polo trainer, and had everything but western horse experience. She moved to Kentucky 15 years ago – following a job offer, and ended up meeting Woody Taylor at her first western horse show in the eastern Kentucky area. She tells the story of their first meeting with humor. Woody rode up to her, introduced himself and let her know that there were folks around who could give her some help if she needed it. Jen laughs and says it was obvious she seriously needed help and apparently Woody recognized this – and came to her rescue. She started to work with Woody right after this horse show. Jen also met and married Nathan Frame after moving to Kentucky, and is happy to let you know that she believes she is now “home.”

Jen describes Woody as patient, kind, and genuine. She relates that he is patient with people and horses, and that is why she trusts him with her horses. Jen is like most cowgirls – she believes her horses are more important than her home, so having them with a trainer of Woody’s caliber is essential to her. Jen showed at the World Show on her mare, That’s Stylin. They won two Reserve World Championships, in Boxing and Horsemanship, and placed in Ranch Trail and Ranch Reining. Jen is really excited about Bugsy and his prospects. She does admit that she will keep showing That’s Stylin because she isn’t sure when Woody will “be done with Bugsy.”

Woody says he has really wanted to show in the Three Year Old Challenge but “just never had enough horse.” He took Bugsy to one reining show before the World and he did okay. They brought him to Wilmington and that was the first time Bugsy was every really asked to win. Woody says he was not sure what to expect, but it turns out that Bugsy is a “show horse.” The horse stepped up and was ready to perform every time they went into the arena. Woody will say that he believes that Bugsy had a great World Show, and has a lot of potential. Jen Frame will tell you that Bugsy is with just the right person to teach him how to use all of that potential.

Although Nathan doesn’t show, he comes to every show and is Jen’s best help. However, if the ARHA continues to offer Freestyle Reining, watch out – we might see Nathan horseback yet.